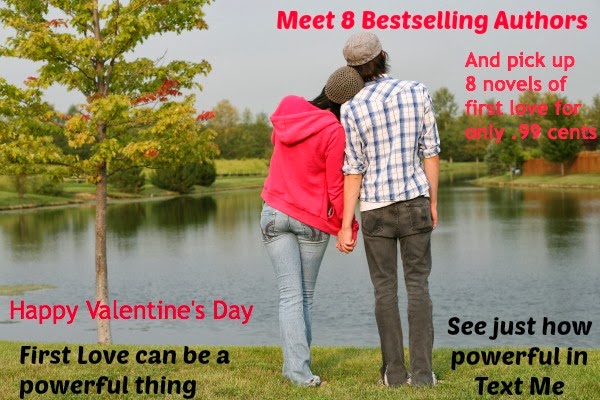 Meet the authors and books included in this awesome set of

8 Novels of First Love.
Just in time for Valentines Day!

Buy Text Me here and save!

Only .99 cents for a limited time.
If you bought each book separately, you would pay over $20.00.

Where did you get the idea for this book?
Right before my daughter went to college, we were feeling a bit nostalgic about her high school years and we started talking about all her first kisses. It was fascinating and I thought her story would make a great book. And it really did!
Who is your favorite character in your book and why?
I’d have to say I love Ali. She’s the sassy best friend we all need.
What is something about yourself that others might not know?
I’ve spoken German to my children since they were born. It’s fun to have a bilingual family. And my husband doesn’t  know it so it’s like I have a secret language with my daughters.
Do you wear socks to bed?
Definitely in the winter. I’m cold-blooded for sure. Only occasionally in the summer.
The Curse Girl by Kate Avery Ellison

Where did you get the idea for this book? – I got the first sliver of an idea when the power had gone out one night and my husband and I were eating pizza by candlelight. The whole house was dark and flickering with firelight, and I’d put a mirror under some of the candles to better reflect the light, and I had this idea of a girl all alone in a huge, dark ballroom with walls of mirrors, holding a candle.
What was the hardest thing about writing this book? – Finishing it. I love to start projects and I hate finishing them. The ending is always the most difficult part.
Do you wear socks to bed? – In the winter, yes. I particularly like stealing my husband’s warm wooly ones.

What is something about yourself that others might not know? – I have a lot of reoccurring dreams. In one of my most common ones, I’ve just purchased a new house only to discover that it has an entire extra wing hidden away in a basement or through a secret door, and it’s haunted.

Winging it! by Shel Delisle

Who is your favorite character in your book?
While Grace, the main character, is near and dear to my heart, Aisha, the angel assigned as Grace’s guardian, is my favorite character.  Aisha is kind and spunky. Plus, She provides just the right amount of antagonism to offset Grace’s bravado.
Where did you get the idea for this book?
The main character Grace just showed up one day and she wouldn’t leave me alone until I started putting words on paper. Still, there are times I wonder if episodes of “The Flying Nun” from my childhood stayed buried deep in my sub-conscious and if this book is just a more modern version of those characters.
Do you wear socks to bed?
I rarely wear socks during the day! 🙂 Living in Florida, I almost always wear sandals.
That said, when the temperature drops here I’ve been known to keep my toes bundled up.
What is something about yourself that others might not know?
I can inflate a pair of jeans while treading water and make it into a life preserver. Fortunately, that’s one life skill I haven’t ever used!
Like Clockwork by Elle Strauss

Where did you get the idea for this book?
Like Clockwork is a companion book to Clockwise. Clockwise takes place on the east coast and the main character travels back in time to the civil war era. I wanted to write a story from a character living on the west coast and the most interesting historical time for me in that locale was 1950s Hollywood. Thus, Adeline was created!
What was the hardest thing about writing this book?
It wasn’t exactly hard, but it took work to research the details of the school and neighborhood. I’d been to Hollywood a few years before writing Like Clockwork, but didn’t know I was going to write a book based there at that time. Google Earth was a life saver!
Do you wear socks to bed?
Yes.

What is something about yourself that others might not know?
My very first book was published in 2000 in Germany, in German. I don’t speak German.

Who is your favorite character in your book and why?
I think that would be Josh Canavan. He’s been through a lot in his young life and he’s built up a tough exterior, but then his vulnerability comes out at times too. And when he cares about someone, he becomes extremely loyal to them.
Where did you get the idea for this book?
The idea came from my love of the Outer Banks along North Carolina’s coast. Swans Landing was based on the island of Ocracoke, which you have to take a ferry to get to. The small island has so much history and I thought it was the perfect place for a race of mermaid people to live unnoticed by the rest of the world.
What was the hardest thing about writing this book?
Figuring out all the secrets everyone was hiding. Some of them I knew early on, but others I didn’t figure out what was really underneath their actions until later on.
Do you wear socks to bed?
No, they would annoy me too much! My feet get too hot while I sleep.
Stirring Up Trouble by Juli Alexander 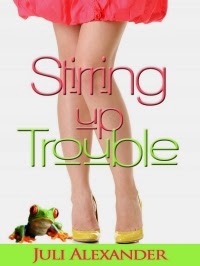 Who is your favorite character in your book and why?
My fave is Zoe because she is smart, ambitious, and nice. She’s also a witch but more than anything, she’s a typical teen. She has lots of self doubt and a crush on her friend’s boyfriend.
Where did you get the idea for this book?
I started thinking about potions and magic. I thought it would be cool to have some side effects or punishment for performing magic. So I decided that witches get punished if they perform selfish spells. That’s why witches in history have green skin, ugly noses, etc. They’ve been using their magic selfishly.
What was the hardest thing about writing this book?
I had a blast writing this book. The hardest part was making sure that Zoe didn’t put up with too much from Jake even though she had a crush. I didn’t want her to be a wimp.
Do you wear socks to bed?
No. In fact, I stick my feet out from the covers. I’m weird that way.
If you could change the color of one thing in the world, what would it be and why?
I’d change the color of ugly buildings to something bright and pretty. 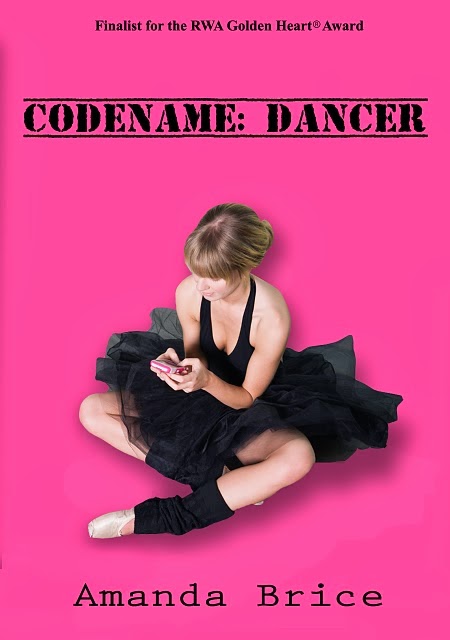 What is something about yourself that others might not know?

If they follow me on twitter, they know everything. Hmmm. I always wanted to write, but never had a story to tell. It was after law school when I finally took a chance on my writing. I’m so glad that I did!

Who is your favorite character in your book and why?

You’d think it would be Dani Spevak, the heroine, but you’d be wrong. Don’t get me wrong — I do love Dani (or I wouldn’t have written her!), but I have a soft spot for her best friend Maya Sapp. Maya is gutsy, outgoing, and really speaks her mind. She’s a lot of fun to write and one day maybe I’ll give her her own book.

Where did you get the idea for this book?Growing up I was a dancer. It was my life for about 30 hours a week. But other than non-fiction about the great ballets, there weren’t any books for teens about dance. All the fiction was for toddlers and young elementary students. I’d always loved mysteries, so I decided to write the book I would have wanted to read when I was a teen.

What was the hardest thing about writing this book?Plotting, which is weird since I’m a plotter!  I’m one of those writers who CANNOT write from the seat of my pants. Everything must be plotted out — in full detail — before I can sit down to write. I know some writers say that takes the fun out of it for them, but if I’m presented with a blank canvas I tense up and panic. But because I require a full, detailed outline in order to write, that requires a LOT of prep work. I love coming up with premises and I love writing, but getting all the details right is hard — and yet so necessary in a mystery!

Through the EYES of a Geek by Kat Brookes 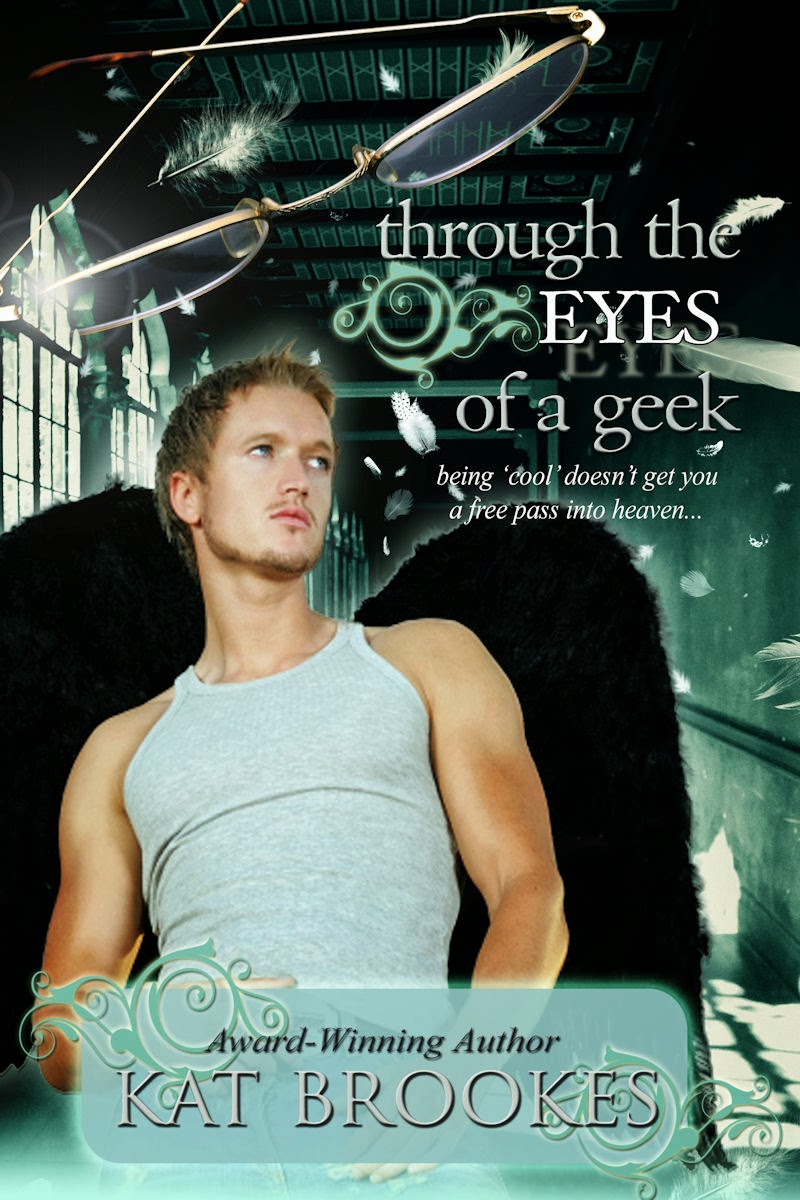 Who is your favorite character in your book?
Ryan – the ‘angelboy’ – because despite the emotionally painful life he’d had growing up, he’s still got goodness inside him.  And I love his snarky sense of humor.
Where did you get the idea for this book?  My oldest daughter is special needs and there were a few occasions where she was ‘bullied’ in school.  I wondered how those bullies might feel if they were in her shoes.  Instead, I decided to write about life Through the Eyes of a Geek, hoping that if even one bully changes for the better from reading this story I’ve succeeded.
What was the hardest thing about writing this book?   The scene at the end when Ryan goes to his parents’ house.  Other than that, the book was fun to write.
Do you wear socks to bed?  Nope.
If you could change the color of anything what would it be and why?   My eyes.  Mine are hazel.   Boring.  Blah.  I’d love to have blue eyes.

What do you love about YA/teen books?